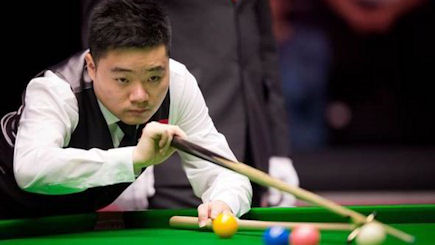 The UK snooker championship came to an end overnight with Ronnie O’Sullivan claiming his fifth crown in an epic final against Judd Trump, however the big news to emerge from the event was Chinese star Ding Junhui’s rise to the top of the world rankings. Despite being knocked out by James Cahill in the round of 32, other results went Ding’s way ensuring he would become Asia’s first world number one once the rankings were revised at the end of the tournament. Junhui becomes the 11th world number one since the snooker world rankings had begun and said he was very proud of his achievement. Likewise O’Sullivan, who withstood a remarkable revival from Trump in the final that saw scores locked at 9-9 after he had led 9-4. Trump looked to have all the momentum but a foul in the final frame opened the door for O’Sullivan and he didn’t waste his opportunity to claim a 10-9 win.

Jordan Spieth has lived up to his billing as the hottest young talent in world golf by scoring a massive 10-stroke win at the Hero World Challenge in Florida. Against a field boasting six major winners and 16 of the world’s top 30 players, Spieth broke the tournament record by six shots to continue an impressive run that also saw him win the Australian Open last week. The EPL title race has been thrown wide open following Chelsea’s shock 2-1 loss at Newcastle on Saturday. It was barely a week ago that the Blues appeared to be running away with the title, but having taken just four points from their past three games they now sit just three points clear of Manchester City who made it four wins in a row with a 1-0 defeat of Everton. Incredibly, West Ham sit in third after a 3-1 win over Swansea while Southampton and Manchester United face off tonight in a huge clash at St Mary’s.

The incredible rivalry between the world’s two best footballers – Lionel Messi and Cristiano Ronaldo – continued over the weekend with both players hitting record-breaking hat-tricks to help their sides to big wins. On Saturday, Ronaldo became the first player to score 23 La Liga hat-tricks in Real Madrid’s 3-0 win over Celta Vigo – but Messi isn’t far behind as he scored his 21st in Barcelona’s 5-1 win over Espanyol. And there were some big results in the NFL with the playoffs approaching. New Orleans appear to have blown their season after suffering a shock 41-10 loss, while San Francisco suffered a huge setback in their 24-13 loss at Oakland which was just the Raiders‘ second win of the season. On the other hand, defending Super Bowl champions Seattle continued their timely resurgence with a crucial 24-14 win over Philadelphia and Indianapolis just about secured top spot in the AFC South with a last minute 25-24 win over the Browns.