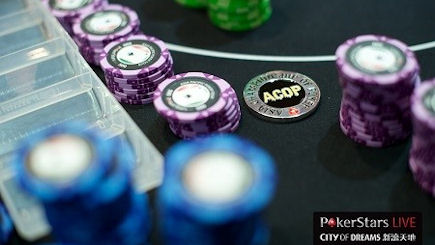 Fresh from winning his maiden WSOP bracelet in Melbourne just a few weeks ago, Australian young gun Rory Young heads into day two of the ACOP Main Event as chip leader and in prime position to take aim at another major title. But the biggest talking point from the PokerStars LIVE Macau room last night was the record field of 287 players who took their seats at City of Dreams – a huge increase on the 203 who took part last year and easily the biggest field ever for the ACOP Main Event. Although some had been tossing around a figure of 300, APPT President Danny McDonagh told World Gaming earlier this week that he would be thrilled with 250 and that figure was easily smashed with arguably the strongest field ever seen in the region turning out.

The local contingent was also well represented with Raymond Wu, Celina Lin, Bryan Huang and Vivian Im among the starters.

With a total prize pool in excess of HK$27 million – well above the HK$15 million guarantee – 172 players will return today to play another five 90-minute levels.