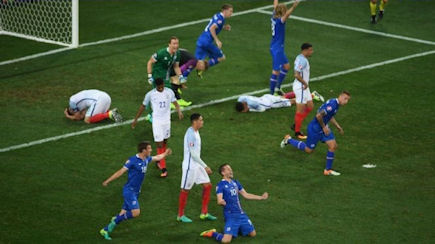 The Round of 16 at Euro 2016 produced has produced some shock results in the last few days, none more so that Iceland’s stunning upset of England. Iceland has suddenly become the feel-good story of these championships. A nation of just 332,000 people, it has more volcanoes than professional footballers and is too cold to run a professional football league – but that didn’t stop them confining England to another disastrous exit with their 2-1 win in Nice.

The English side was touted as their most promising in years before Euro 2016 kicked off, with rising stars such as Raheem Sterling, Harry Kane, Jamie Vardy and Eric Dier tipped to lead them back towards the top of world football. Instead, they barely scraped through their group thanks to a lucky last-minute win over Wales – producing two scrappy performances in draws against Russia and Slovakia.Manager Roy Hodgson’s team selections were a constant source of criticism throughout, with many accusing him of having no idea what he was doing as he continued to chip and change his starting XI. In the end, Hodgson had no choice but to announce his resignation just minutes after a loss described as their worst of all time.

At the opposite end of the spectrum, Italy is enjoying a stunning renaissance after gaining revenge for their loss in the 2012 final with an impressive 2-0 win over Spain. The biggest clash of the tournament so far saw Italy produce another brilliant defensive display while exhibiting how to transition fast and hit like Juventus, Atletico Madrid and more recently Leicester City.

They base their game around a rock solid defence then counter-attack at lightning speed when opportunities arise.

Defence has been Italy’s trademark for decades but at some point in the early 2000s it was considered obsolete, boring, and ineffective. Now, the new generation of football coaches have rekindled it while infusing fresh elements. The win over Spain may well prove to be a blueprint for how football will be played for the next decade. Spain has been the dominance force of the football world since they Euro 2008 in Austria – a period highlighted by the influence of Barcelona’s “Tiki-taka” style which has produced four Champions League titles in the last decade. Barca is still the driving force in clubland, although their dominance is being threatened by clubs such as Atletico Madrid who play a much more balanced, functional and counter-attacking style of football.

It is no coincidence that Leicester City, using a similar modus operandi, won the Premier League last season. So having beaten Italy 4-0 in the Euro 2012 final, this time Spain found that the Italians were everywhere, using a very compact unit to suffocate their attack. Stars like Andres Iniesta and David Silva couldn’t find the through passes they are famous for and failed to produce any real threat in the box.

These two games have demonstrated two facts we suspected even before the beginning of the tournament – that Spain’s golden era is waning and that the hype over England was again unwarranted.

Nevertheless, the final eight has taken shape and makes for some mouth-watering match-ups highlighted by Italy against World Cup champions Germany. Iceland have nothing to lose against hosts France, while another side competing in this event for the first time, Wales, line up against a Belgium side starting to find form.

And will Poland’s run continue or can Cristiano Ronaldo finally deliver Portugal the title they so desperately crave? What a huge week it promises to be.