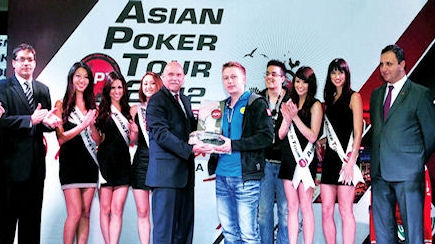 Tournament poker started in Macau in 2007 and flourished for four years, with player numbers increasing every year. But in late 2011 and early 2012 some cracks started to appear. The big tourneys are back for now, but where is Macau’s tournament poker scene headed?

I distinctly remember the day I discovered tournament poker was coming to Macau. I was playing the 2007 World Series of Poker (WSOP) in Las Vegas, and 2005 WSOP main event champion Joe Hachem mentioned to me that he was coming to Macau as part of the inaugural Asia Pacific Poker Tour (APPT) season later that year. I also played the APPT circuit that year (and every year since) and became hooked on tournament poker in Asia, and especially Macau, ever since.

It seems I’m not the only one. From humble beginnings, both cash and tournament poker in Macau has grown exponentially. We’ve seen the emergence of the PokerStars Macau (PSM) live card room with its weekly tournament schedule, the Macau Poker Cup (MPC) with its signature Red Dragon main event every few months, increasing APPT Macau numbers each year and the uniquely formatted Macau Millions tournament. Also let’s not forget the contribution the Manila-based Asian Poker Tour (APT) has made in holding major events in Macau in 2008, 2009 and 2010, as well as throwing some pretty awesome player parties!

It was all good news for Macau tournament poker through to late 2011. But then something happened. The gloss wore off. The first sign of trouble was the APT not holding a Macau-based event in 2011 due to the closure of the Hard Rock poker room. In this respect the APT was a victim of Macau’s success. With Macau gaming growing at a stratospheric rate there simply wasn’t a venue free to host the tournament. All the big casinos were too busy servicing their highly lucrative baccarat trade to concern themselves with the likes of tournament poker, which is a relatively low yield product.

The next big problem was PSM losing its live card room at Grand Lisboa. To the surprise of many, in 2009 PokerStars’ then Regional Director of Marketing David Jung had managed to secure a three-year deal that saw Grand Lisboa host the PSM live card room. That deal ended on 8 March this year and it was no surprise when Grand Lisboa declined to renew, despite this February’s Macau Poker Cup having a record 635 entries to its Red Dragon. Again, poker had fallen victim to Macau’s success, as Grand Lisboa wanted their room back to further service the baccarat market. What then followed was a period of uncertainty for Macau tournament poker. The previously announced schedule of PokerStars events was thrown into disarray. The 2012 Macau Millions was cancelled. Other major events were postponed indefinitely. There was a solid core market of poker players who desperately wanted to play live tournaments in Macau, but now they had no home. Rumors flew around the poker community regarding which property PSM would move to. A deal with City of Dreams (COD) was all but signed, sealed and delivered, then senior management at COD scotched it at the last minute. COD had formerly been home of the Hard Rock live poker room, but that room had also gone by the wayside due to the “baccarat trumps poker” phenomenon.

One shining light amongst this gloom was confirmation the APT would be returning in 2012 for the APT Macau. The event will run from 25 to 31 July this year at StarWorld, where the APT Macau was held in 2008, 2009 and 2010. The APT had launched in 2008 in a blaze of glory but in its early years spent money like a drunken sailor on shore leave after four months at sea. New CEO Jeff Mann took the APT reins in 2011, and set about re-structuring the tour into a model that was sustainable. He has done a fine job, and respect for the APT from the Asian poker community has grown substantially in the last 12 months. The APT side events are excellent in that there are many to choose from and they have relatively slow structures, a conscious decision the APT implemented after listening to their customer base. The APT has been hard at work adding many stops to its tour and they now announce events with a long lead-time, giving players ample time to plan their flights and accommodation.

After some months of uncertainty, PSM finally announced a deal with Grand Waldo (GW), the original home of PSM back in 2007 and 2008, before the move to Grand Lisboa. This was welcome news for the players, and despite some grumblings about the new venue not being a BIG9* casino, I believe the players were willing to give GW a chance. Having their tournaments at GW is better than not having them at all, right? Things weren’t helped by PSM announcing four events for the rest of 2012 at GW, then postponing the second event by two weeks shortly thereafter, then announcing the cancellation of the second, third and fourth of those four events, leaving just the one MPC on June 9 to 18 as confirmed.

That first MPC at GW saw player numbers considerably down, with “only” 391 players in the Red Dragon field. Sure, 391 is a number we would have been rapturous about just two years ago, and that number should be taken in context with the fact that this particular MPC clashed with the WSOP in Las Vegas. But it’s also the first MPC after a long break and that would be a factor I would expect to increase the field size. Any way you cut it, 391 is a disappointing number after getting 635 runners to the same event just four months prior. Congratulations go to Team PokerStars pro Celina Lin for winning the event and in doing so becoming the first person to win a second Red Dragon in its 16-event history. So where to from here? The APT looks to be in good hands under Jeff Mann and its relationship with StarWorld seems solid. I expect the APT Macau to be a well-established event every year from now on, and actually there’s no reason there couldn’t be more than one APT Macau per year. The player base is there.

PSM is a different matter. They’ve either got to move to a BIG9 casino or establish a solid home at GW and get it right. That home needs all or at least most of the amenities the players came to expect at Grand Lisboa. One advantage of GW is that the lack of space that existed at Grand Lisboa is now a distant memory. GW has plenty of space, some might say too much! There is certainly no lack of room to expand into. At the time of writing PSM have not announced any more events, but don’t be surprised if there are two or three more at GW this year. For now at least, PSM are not running the program of weekly tournaments that players enjoyed at Grand Lisboa, and there are no cash games at Grand Waldo. Both of these problems are serious shortcomings which need to be addressed.

Will players embrace PSM at GW? Will PSM move to a BIG9 property? Will any BIG9 property have them? Given the “baccarat trumps poker” phenomenon, does PokerStars fit into the long term Macau gaming landscape? Will some other option emerge?

Only time will fully answer these questions.