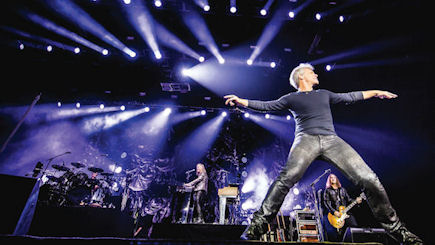 Music fans have enjoyed a spectacular few months in Macau with some of the biggest names from Asia and around the world dazzling local audiences.

By far the most exciting of all was the arrival of veteran rock band Bon Jovi, who were visiting Macau for the very first time in a career spanning more than 30 years. The American rockers performed all their hits over the course of two thrilling nights in September including the likes of “You Give Love a Bad Name”, “Livin’ On a Prayer”, “Bad Medicine” and “Keep the Faith.”

Also appearing at the Venetian was popular television show “The Voice of China” for its Mid-Autumn Concert. The show’s four mentors – Jay Chou, Ying Na, Harlem Yu and Feng Wang – each brought their contestants to Macau where they performed their best-known songs from Season Four at The Venetian Theatre.

One of China’s most influential artists, Dave Wang, brought his soulful melodies to Broadway Macau with a special concert for his long-time fans.

And for those wondering what they can expect from Macau’s new properties when they open in 2016, the prestigious Louis XIII provided a sneak preview when it sent its team of butlers on a specialized training course at the world famous MCM Palace Consultants in Paris, where they were extensively trained to the highest world standards in service, etiquette and entertaining. We can’t wait to experience their skills when Louis XIII opens next year! THE VOICE OF CHINA