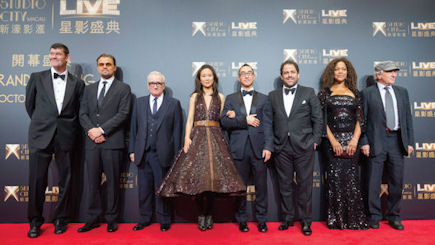 The opening of a new casino is always big news in Macau, but Studio City captured the attention of the entire world with its glitzy launch party – highlighted by the presence of three Hollywood superstars.

Actors Robert De Niro and Leonardo Di Caprio and director Martin Scorsese were special guests for the official opening on 27 October, fronting a light-hearted press conference to launch their short film The Audition before enjoying the festivities alongside Melco-Crown co-Chairman James Packer.

Also making his way to Macau was former Formula 1 ace Mika Häkkinen. The 1998 and 1999 world champion was on hand for the launch of two new Mercedes models, the Mercedes-AMG GT and the S-Class Coupé, at a gala dinner at the Venetian poolside.

Gaming executives from across the globe descended on our shores in mid-November for the third running of the Macao Gaming Show, which is getting bigger and brighter by the year. And there was plenty of color on display at Broadway Macau too, where some of the best local and international street artists wowed the crowd with their live graffiti murals on a 45-metre long wall.