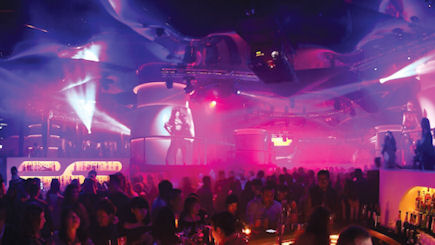 Macau’s nightlife has received a much needed boost following the launch of world famous nightclub Pacha at Studio City in January.

Spend US$4 billion on a spectacular integrated entertainment, gaming and retail resort and what kind of nightclub are you going to put in it? The answer, of course, has to be something like Pacha – one of the world’s biggest nightlife names. The franchise now has 24 venues worldwide and its flagship, on the Mediterranean party island of Ibiza, is arguably the most famous club in the world. Its latest offering has just opened at Macau’s newest landmark, the 1930s cinema-inspired Studio City. “Pacha style is Ibiza style. The Balearic, bohemian, freewheeling hippy style,” says Managing Director Eddie Dean. “It’s a place where beautiful people can kick back and have fun in a beautiful environment, with great music and great liquor.”

Hailing from the New Jersey borough of Caldwell, Dean spent his college days at the University of Delaware organizing student trips to Atlantic City, before opening a series of night spots in Brooklyn and Manhattan. In the early 2000s he was looking around for a new concept for a 3,000 square meter warehouse he had taken over a few blocks west of New York’s Times Square. One trip to Ibiza and he was sold. “If you go to somewhere like Las Vegas everything’s fake and put on. In Ibiza you just get off the plane and it feels so real. There’s so much heart and soul. I think Pacha is the essence of that,” he says. “I was enamored with what they had accomplished. It was a family-run business, committed to excellence. It was a very marketable story and I felt it would translate well across the Atlantic.”

With a 4,000 square meter layout capable of accommodating 3,000 partygoers, Pacha Macau is one step up from New York. Furniture is custom made in the Pacha style of Spanish textures, washed wood and cement. Four private luxury KTV VIP suites have been included for Asian tastes. In warmer months, a spacious patio area promises hours of enchantment and relaxed glamor among fountains and palms. Two further areas under planning include a high-end cocktail bar featuring exotic ingredients. “If you want lavender or cinnamon, we’ll give them to you,” says Dean. A Pacha-branded “red room” will play different music from that of the main dance floor. As for hardware, the venue is fitted with a state-of-the-art German-made d&b audiotechnik sound system working in concert with lighting from Denmark’s Martin Professional.

“Pacha is known for its big name international DJs and its dance music; anything from Trance to Techno,” says Dean. “We know the Asian market reacts more positively to pop and trance DJs such as Calvin Harris and Marcus Schultz. We’ll be blending these kind of acts with local and regional talent. There will be a lot of experimenting.” With patrons in mind, Dean acknowledges his biggest challenge will be attracting mainland Chinese. Beijing, Shanghai and Guangzhou have no shortage of jam-packed and jumping nightclubs. Yet when they come to Macau mainlanders only seem to want to gamble.

“We will certainly embrace mainland Chinese in addition to expats and locals,” says Dean. “Right now a lot of Macau’s clubs tend to be very similar and there seems to be resistance to change. We have a very strong team here. Once we’ve been open for a couple of months we’ll have information on which to base decisions. Then we’ll start trying new things out. You can’t become great without taking chances.” The founders of Pacha, brothers Ricardo and Piti Urgell, opened their first club in Barcelona in 1967. On holiday in Ibiza with his wife, Ricardo fell in love with a property he came across, prompting his wife to remark, “If you buy it you’ll live like a Pacha.” Thus the brand, which is slang for lord or king, was born.

Pacha Ibiza opened in 1973 but it wasn’t until English DJs such as Paul Oakenfold started hyping the island up in the late 1980s that it really took off. Today it regularly ranks among the world’s top five clubs in industry polls. Dean opened the franchise’s New York branch in 2005 and it quickly became one of the hippest and most popular clubs in the city. Pacha New York held its closing party on January 24 after a run of more than a decade – remarkable by industry standards. Dean will now split his time between Macau and other projects.

When asked about the secret to running a popular nightspot, he simply replies, “Hard work, a good team and the relentless pursuit of excellence. You can’t take a day off. That applies to any business.” While acknowledging the challenges ahead, Dean is quietly optimistic. “This is a different market and we’re in a different culture, so it might take some time to get the place popping,” he says. “But I wouldn’t be surprised if it comes quicker than expected. In three or four months I could be going out there to find it going off like Ibiza.”

Located on the Macau Peninsula, Barcode is a unique nightspot offering a great selection of drinks...

Macau has no shortage of luxury items on offer – particularly in the food and beverage sector –...

The Stallion has partied the night away in every bar, pub and nightclub Macau has to offer, so he...

While The Stallion can usually be found in the bars and nightspots of Asia, each summer he gallops...

As keen WGM readers will know, for the past three years the University of Macau has offered a...