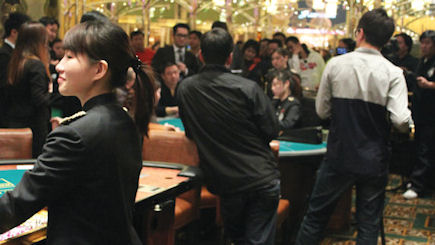 Last issue we sat down with the man responsible for the study and promotion of responsible gambling in Macau, Dr Davis Fong, in the first of a series of stories on various aspects of responsible gambling. This time we’ve headed out into the community for an intriguing chat with Ms Bonnie Chang, Service Coordinator of Sheng Kung Hui Macau Social Services Coordination Office which oversees Sheng Kung Hui Gambling Counseling and Family Wellness Centre – one of four treatment centres in Macau where problem gamblers can get the help they need. Ben Blaschke: Thanks for taking the time to speak with us Bonnie. You play a vital role in helping people whose lives have been destroyed by their gambling addictions. First of all, how common is problem gambling in Macau?
Bonnie Chang: According to official statistics, the ratio of Macau’s gambling disorder has declined from 6 percent in 2007 to 2.8 percent in 2013. From a statistics point of view, this is reference data. It scientifically reflects the overall situation and is also an index that Macau needs to continue to work on and maintain. On the frontline there is no lack of young, middle-aged and elderly people seeking help. In our services data, those who seek help are mainly between the ages of 41 to 60, which accounts for 52.1 percent of clients. It’s also worth noting that those under 30 years of age account for 22 percent which shows that a number of young people in Macau are affected by a gambling disorder. Society should avoid gambling among the younger generation or it will be a great challenge to their social development in the future.

BB: How do your patients end up at your treatment centre. Do they come to you directly or are they referred through another party?
BC: Most callers get to know our treatment centre through publications or the introduction of institutions. They will first call the gambling hotline, asking tentative questions about whether it is confidential, what methods we use, how to deal with debt and so on. The instructor will encourage them to come in for an interview although formal treatment won’t start until they agree.

BB: How long does a standard treatment take and does the length of time differ based on different factors? If so, what are those factors?
BC: The rehabilitation situation varies. There is no standard treatment time. The length of treatment time depends on the extent of the patient’s gambling addiction, motivation, the extent of debt, the level of network support such as family and so on. For example, if the caller isn’t motivated he might only come in for interviews once or twice then refuse treatment – they want instant treatment to quit gambling and repay their debt. Another example is that some callers have very complicated gambling issues such as suffering from a mood disorder or facing a marital crisis. In this case the process will become more volatile and may take up to several years to maintain stability. Even if they can stop gambling for over six months, from experience they may fall back into old habits due to a minor thing or even just a casino opening. This is because there is too much temptation in Macau and for those who once had a gambling addiction problem, there is no immunity. BB: Can you run us through and explain the process of treating someone who has a gambling problem and comes to you for treatment?
BC:The common counseling process usually has the following objectives and content:

BB: What sort of success rate do you have?
BC: As I mentioned before, the easy accessibility of gambling in Macau is the biggest challenge to quitting gambling so it takes a long time and relapse happens. It is difficult to use a unified standard. In Hong Kong they use six months as the observation period. It is considered a successful case if there is no relapse in six months. But in Macau, out of 10 callers maybe only three or four of them will stay away from gambling for more than six months. The rest will have to experience a few cycles before they succeed! BB: Do you have any specific examples of success stories you can tell us about?
BC: Sure. There is a male gambler who has gambled for over 10 years. Gambling caused disharmony in his family and the family has been in a constant cycle of debt repayment. His wife eventually wanted a divorce so he was forced to act as both father and mother of his children. The most gripping pain for him was seeing a scattered family as a result – the negative impact on the next generation was all his fault. He attended gambling counseling for more than three years and relapse happened often during that time but he constantly reflected on his own and recognized the fact that gambling is a path of no return. Once he did that, positive changes started to appear in his values and lifestyle. He has now stopped gambling for a period of time and his children have served as the motivation for his transformation. There is also a female gambler that springs to mind. Due to the seriousness of her gambling addiction, she broke the law and was sent to jail. Her family wasn’t willing to forgive her for the damage she caused and didn’t visit her at all while she was in prison. She suffered through some long and lonely days there but also spent time reflecting on her mistake. When she was released, her husband’s forgiveness and love convinced her to accept gambling counseling. It was while recalling her life during counseling that she realized the cause of her gambling issue was that she suspected her husband of having an affair. Gambling was her way of releasing her anger and unhappiness but eventually became an addiction. After being released from prison, her husband’s love finally eliminated her doubts and the counseling process helped her rebuild trust in her husband, which also reduced the chance of relapse in the future.

But there are a lot of very bad cases. The most profound are those with very deep gambling addictions. Because of the harm they’ve caused to their family and friends over a long period, by the time they seek help they’ve already been deserted by them and live alone in homeless centers. Their level of education is often low and their income isn’t enough to offset their debts and living expenses. You can imagine their frustration and loneliness. You only see despair and endless regret in their eyes. It is very difficult for this kind of gambler to find the motivation to quit gambling in the long run because their life has lost focus. Their situation might best be described in a Chinese idiom as “dreaming their life away!” BB: You must see some very desperate people in some very unfortunate situations as a result of their gambling.
BC: Yes! From the angle of addiction behavior, it is very difficult for someone to quit a habit or material that they’ve been dependent on for a long time. For those who come to quit gambling, most of them also face certain psychological distress, debt or tension with family members. Some gamblers even try to commit suicide and give up on themselves. In the Chinese culture there is a deep-rooted belief that domestic shame should not be made public so it is already a breakthrough for them to decide to seek help. To be able to help them find the courage to face problems, recognize that gambling can’t make them rich, stop relying on gambling to live, improve their family relationship and find purpose in life – it’s like seeing the metamorphosis of a caterpillar into a butterfly. The joy of rebirth is irreplaceable.

BB: Are all participants willing or are some of them reluctant to get treatment?
BC: Some individuals are a bit reluctant, especially those who don’t admit the seriousness of their gambling problem. Even if they receive counseling, perhaps there are some conditions or reasons such as the family helping them pay off their debts. It might be the last chance for their relationship or something similar. In these cases they are often reluctant so in general they will only come in two or three times before losing contact or refusing to return. BB: So how do you go about treating them as opposed to treating people who want help?
BC: Generally those with low motivation to seek help reflect less on the impact gambling is having on them. They are still immersed in the emotional ups and downs of gambling or in the dream of winning big money so in the first and second interviews emphasis will be placed on triggering their “motivation” to change; guiding them to think of the long term consequences if things don’t change; and assessing the extent of their gambling disorder. The instructor will not require them to immediately stop gambling but will be more like a friend, helping them make rational analysis so that they will lay down their defense mechanisms and be more willing to open up. The purpose is to trigger their gambling motivation in order to facilitate their future long-term treatment.

BB: Where do the majority of your patients come from?
BC: Most are Macau locals, followed by Chinese mainlanders or migrant workers.

BB: How are you funded?
BC: Mainly from the Social Welfare Bureau as well as the DICJ and DSEJ.

BB: How many staff do you have and are there certain qualifications needed to treat people?
BC: We have about 20 social or psychological counselors. They are respectively responsible for the supervision and work in the front lines, providing hotline and interview counseling for those who seek help and helping them with gambling addiction or debt problems. Employees must have a degree in the profession, such as social or psychological counseling. They must also complete professional gambling recovery qualifications to join our team. In addition, we have about 10 support staff who help us hold some community-based prevention and education activities to enhance the awareness of the impact of gambling disorder among Macau citizens and to encourage people in need to seek help. BB: The latest wave of new properties in Macau has started to arrive with the opening of Galaxy Phase II earlier this year and many more to follow. What sort of impact do you expect these extra properties to have on problem gambling in Macau?
BC: A lot of foreign studies have pointed out that when there is a higher degree of gambling accessibility, the local gambling addiction rate will be higher. Frontline service experience also confirms this view. The frequency of gambling participation of quite a few individuals will increase. This is attributed to easy accessibility of casinos, the society’s general recognition of gaming value and so on.

Note: According to the American Diagnostic and Statistical Manual of Mental Disorders, the terms “problem gambling” and “pathological gambling” were changed in 2014 and are now known as “gambling disorder.”

If you or someone you know has a gambling problem, call the 24 Hour Gambling Counseling Hotline on +853 2823 0101 or email [email protected]