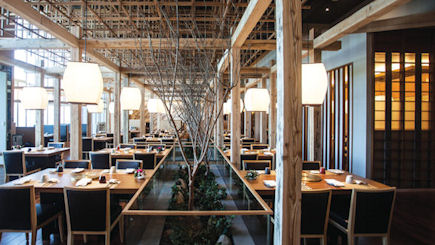 Solaire Resort & Casino, located in the heart of Manila’s ever expanding Entertainment City precinct, has come a long way since it first opened its doors in 2013.

Perhaps best described as a work in progress when WGM first visited during those early days, Solaire has not only added the impressive new Sky Tower but revamped its food and beverage offerings with a range of impressive restaurants now welcoming guests. One of those is Kiwa.

Korean food isn’t typically associated with fine dining but Kiwa has set out to alter that perception by paying close attention to detail and presenting only the highest quality ingredients. This isn’t restricted to the food. From the moment you walk in you’re welcomed by the soothing sound of trickling water, which flows under a small wooden bridge, while the carefully placed fixtures and fittings have all been imported directly from the mother country. It is also immediately evident that Kiwa provides a much more relaxed environment than your typical Korean diner. Not only has the usual hustle and bustle been replaced by deliberate and attentive service, there is none of the usual Korean barbecue smoke filling the air due to the use of smokeless charcoal and a high quality ventilation system placed under the floor. Yet like any good restaurant it is the cuisine that takes center stage. Our meal began with an array of appetizers that were all wonderfully fresh and bursting with flavor – a cold pumpkin salad with cream sauce; dried cranberry and pineapple; a sashimi set accompanied by a delicious combination of mango and tiny cubes of soft creamy cheese (made in-house); Korean pancakes; beef brisket salad; a Korean savory porridge and finally kimchi with a beautiful Korean pear and a light, watery vinegar sauce. The scrumptious main course was Yangnyumgalbi beef ribs marinated in sweet soy sauce with a range of leaves and a large pine mushroom. Very impressive.

This was accompanied by a bean sprout salad in chilli paste, watery kimchi and Doenjang jjigae which is Korean tofu with vegetables, beef and potatoes. The Doenjang jjigae comes boiling with steamed rice and is excellent soul food! We’re told that the cold plum tea called Maesil Cha we had for dessert aids digestion although a warning – it might be a touch sweet for some!

Truth be told, it’s hard to find anything to fault at Kiwa with its intriguing twist on a classic Korean barbeque. The Roadhouse Macau at Broadway is one of the best places in the city to watch this summer’s...

WGM went in search of the secret ingredients behind one of Macau’s favorite souvenir snacks, meat...

Palms Café and Bar at Sheraton Grand Macao Hotel serves an array of food and drinks for any time...

WGM takes a look at one of Macau’s most popular treats – the humble almond cookie! It was...

WGM enjoyed one of the finest views in Macau while sampling the exceptional Cantonese...