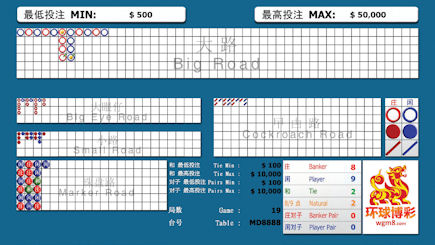 Last issue we brought you a trip down memory lane to what was arguably the most talked about article we have ever run in the pages of WGM.

“Fate in the cards: understanding baccarat trends” first appeared in our Jul/Aug 2011 issue and proved to be an article of particular significance as the first time baccarat’s complicated trends had ever been fully explained in English.

But given just how incredibly complicated these baccarat trends are, our original article was actually split into two parts with Part 2 first published in Sep/Oct 2011.

For those who missed it, you can read Part 1 by visiting www.wgm8.com. For the rest, we present “Fate in the cards: understanding baccarat trend Part 2.”

Enjoy – and remember you can find all our past issues and articles on our website, www.wgm8.com.

Welcome to the conclusion of our exposé on the mysterious art of following baccarat trends. Part 1 was the cover feature article of our Jul/Aug issue, and reading part 1 will give you a better understanding of part 2. If you don’t have a copy of our last issue, you can read part 1 (and every other article ever published in World Gaming) on our website wgm8.com.

Here’s a summary of what we learned in part 1:

Now let’s move on to explain the colour rules, the prediction table and how players interpret the roads to determine what to bet on each hand, and how much to bet.

The colour rules for derived roads

Big eye boy, the small road and the cockroach road each show alternating streaks of red and blue, with a new symbol added to each derived road after each hand once the road has started. But how is the colour of the symbol determined?

This is very interesting, and quite complex. The best way to understand is to consider big eye boy first. Once you understand big eye boy, it’s quite easy to understand the small road and the cockroach road as they require only a minor adjustment. So let’s focus on big eye boy.

The rule for adding a symbol to big eye boy is different, depending on whether:

The colour rules simply state that for streak continuers (in the big road), the result of the next symbol in big eye boy is red for ‘connected’ and ‘long’, and blue for ‘one lounge, two bedrooms’. See figure 7 below (note figures 1 to 6 were in part 1 of this article).

Note the colours of the circles in the big road are irrelevant, which is why they are shown in black instead of the usual red and blue. What about the situation when a streak starter immediately follows another streak starter? This is a ping pong situation. The colour of the symbol to be added to big eye boy for the first two symbols of the ping pong could be red or blue depending on the length of the two prior streaks, but once we get to the third hand and onwards in the ping pong, the symbol added to big eye boy must be red. As long as the shoe continues to ping pong, big eye boy will continue to be filled with a streak of red symbols. Given the colour rules explained above, you should be able to prove this ping pong result to yourself (hint: the answer is in figure 9).

Take a look at figure 12. At the very right there is a small table with the three blue and three red symbols. I call it the ‘prediction table’. Notice it has a red 庄 Chinese character (representing banker) and a blue 闲 Chinese character (representing player) at the heading of the columns. Under those characters are blue and red hollow circles (for big eye boy), solid circles (for the small road), and slashes (for the cockroach road). It just so happens that in figure 6 they are all blue under banker and all red under player, but they don’t have to be same colour each side. It can look like figure 11.

In the big road and bead plate, players tend to look for patterns and symmetry. As a general concept, many red symbols in big eye boy, the small road or the cockroach road indicates a somewhat consistent big road. The opposite of this is the appearance of a lot of blue, which indicates ‘choppiness’. But consistent choppiness itself is a pattern that players may latch onto.

Players are also likely to place more faith in betting decisions where all three symbols (hollow circle, solid circle and the slash) are the same colour in each column of the prediction box, and that colour feels a likely result for the next symbol on each of the three derived roads. This feeling will usually come from some kind of pattern in the derived roads. For example figure 13 clearly dictates a bet next hand on player.

Baccarat trend following and the derived roads big eye boy, the small road and the cockroach road have been around for decades and there is no sign of them fading away. Originally a Macau phenomenon, they are spreading across Asia and the world. The next time you play and see those red and blue trails of symbols on the display, they won’t be such a mystery. Good luck at the tables!

Baccarat is a serious passion for many millions of people in Asia and around the globe. Yet for...

The tie bet in baccarat is something that has always been a bone of contention. Is it a good bet or...

This article first appeared in the Sep/Oct 2016 issue of WGM. DUOBAO combines baccarat and poker to...

Wynn Palace is set to more than double its quota of Dragon 7 baccarat tables after the...

In the nearly six years since WGM was launched in late 2009, we've consistently received strong...